Narcolepsy. Don’t sleep on it!

If anything is not easy to recognize, it’s narcolepsy!

Since “narco-“ means ‘put to sleep’ and “-lepsy” means seizure or attack, the etymology of this sleep disorder says it all. A hallmark symptom of narcolepsy is daytime sleep attacks, meaning the irrepressible need to fall asleep in any situation.

These sleep attacks are not under voluntary control. As a consequence of this specific symptom, people suffering from narcolepsy have stories about unexpectedly falling asleep in peculiar situations. Most of these moments are not as funny as one would expect and, on the contrary, create great distress. Suffering from narcolepsy demands a great deal of adaptation.

Here are the five most typical symptoms. They show up in diverse forms and variable intensities. 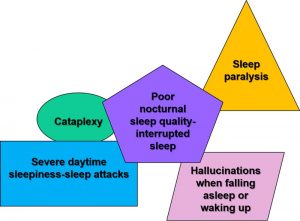 Two types of narcolepsy exist, type one with cataplexy and type 2 without it. Symptoms do not appear always all at once but can evolve over time.

All people suffering from narcolepsy have experienced disabling and severe daytime sleepiness. The sleepiness in narcolepsy presents as a “sleep attack,” a need to sleep that is irrepressible. People can fall asleep during various day-to-day activities, long enough for it to be frightening. Aside from sleep attacks, they have a normal level of alertness during the day. Moreover, people with narcolepsy usually feel rested after waking in the morning, which distinguishes it from another sleep disorder marked by sleepiness, namely hypersomnia.

Cataplexy is an impressive symptom experienced by all people affected by type one narcolepsy only (not type 2). It is a sudden loss of muscle tone while being awake. Episodes can last from a few seconds to several minutes and go away by themselves. It can affect all muscles, or just part of the muscles, for example in the muscles of the face, neck or the one responsible for speech. It can also affect the limb muscle tone, hence the risk of falling. During a full cataplexy attack, a total body collapse occurs followed by a temporary paralysis. Sometimes confused with fainting (syncopes) or epileptic seizures, cataplexy episodes are different, as the person remains fully awake and conscious. Episodes of cataplexy are usually not dangerous, but they may occur anytime during the day. Strong emotions, often positive ones such as surprise, laughter or excitement, trigger cataplexy.

Sometimes, the unpredictable and uncontrollable daytime symptoms of sleepiness attacks and cataplexy can also have hazardous consequences. Therefore, these symptoms should be addressed and some restrictions may be necessary, such as not driving.

Sleep paralysis and hallucinations at sleep onset and/or offset are often the most unsettling symptoms of narcolepsy. Worries about “going crazy” are frequent with these kinds of narcolepsy symptoms. Unlike sleepiness attacks and cataplexy, they occur at the transition between wake and sleep, when people are in bed just before falling asleep or at awakening. Sleep paralysis resembles cataplexy since it’s the temporary inability to move or speak for a few seconds or minutes while being fully conscious, but occurs at the edge of sleep and without an emotional trigger. People often say that these paralyzing attacks are terrifying. Moreover, they can experience at the same time very vivid, and often frightening, hallucinations (usually visual) or dreamlike images. Hallucinations can occur upon falling asleep (hypnagogic), or upon awakening from sleep (hypnopompic). For example, people say that while they were in bed paralyzed, they saw bugs on the wall or heard horrible noises.

Other symptoms of narcolepsy, aside from the four mentioned, include poor sleep quality because of interrupted sleep (fragmented sleep). Other daytime symptoms are automatic behaviours, meaning that for a few seconds or minutes, an activity is carried out without conscious awareness or memory of it. These brief daytime sleep-like episodes arise while performing an activity, usually something habitual like driving.

About one in 2,000 people are affected (0.05% of the population) with no gender difference. However, like most sleep disorders, chances are that it is under- or misdiagnosed because health professionals are not well versed in this disorder and nor is the general public. Narcolepsy is often confused with other sleep or psychological disorders, and people often suffer from social stigma (seen as being sluggish or simply lazy, sleep deprived, having memory problems, etc.), which are all factors that can prevent them from getting proper help.

Symptoms often begin in adolescence or during mid-adulthood, but can start at any time in life, either later on or during childhood. Since it can take as long as 10 to 15 years to get the proper diagnosis, narcoleptics are often diagnosed in their thirties and forties. Despite being a lifelong disorder, it does not usually worsen as the person ages even if symptoms vary over time.

What to do or not to do?

As most people suffered for several years before getting the right diagnosis, we should all keep an eye out for the symptoms of narcolepsy, especially sleepiness attacks and cataplexy. Seek the help of healthcare providers as soon as possible.

Severe daytime sleepiness should never be taken lightly. Think of it as a red flag for sleep troubles or other diseases. Also keep in mind that sleep attacks and cataplexy should be taken seriously.

Once sleep deprivation has been ruled out along with other medical and psychological conditions that may be causing the symptoms, it’s time to consult sleep experts.

Sleep studies are the next course of action to continue the eliminatory diagnosis process and exclude other sleep disorders causing sleepiness (i.e. hypersomnia, sleep apnea, etc).

They are a combination of subjective and objective sleep assessments done at the sleep clinic at your convenience by sleep professionals. They could include questionnaires, keeping a sleep journal and evaluating overall sleep quality using diverse physiological tests and calculating the time it takes to fall asleep (sleep latency).

Your sleep quality and architecture will be recorded using a polysomnogram (PSG). This non-painful test uses multiple electrodes resting on your skin to measure electrical brain and muscle activities while you sleep. Sleep studies often test your breathing and lung function as they can explain several daily symptoms of poor sleep. To do so, respiratory rates and oxygen levels are recorded with a nose cannula, an effort belt is placed over your chest and abdomen and a heart rate and oxygen sensor at the tip of one of your fingers.

Another hallmark objective test is the Multiple Sleep Latency Test (MSLT), a nap test that investigates excessive daytime sleepiness after an overnight recording. At the clinic, multiple nap opportunities are given during the day and the number of times the person falls asleep, time until sleep initiation and napping sleep architecture are measured with PSG.

Symptoms of narcolepsy can be controlled. The initial non-pharmacological treatment consists of adopting specific measures of sleep hygiene, for example a daily schedule that takes into account naps. Daytime sleepiness is treated with medication that stimulates alertness. Antidepressants, which have anti-cataplexic properties, are used to treat cataplexy, hallucinations and sleep paralysis. These drugs form the basis of pharmacological treatment.

Symptom recognition, awareness and sleep studies are the way to go to get the proper diagnosis and treatments.

What are the causes of narcolepsy?

Although the causes of narcolepsy are not fully understood, we have good indications that this disorder is a result of a combination of genetics and brain chemistry.

Several guilty molecules have been uncovered, but the most important one seems to be a brain chemical called hypocretin (also known as orexin). About ninety percent of the time, narcolepsy with cataplexy (type 1) presents with lowered levels of hypocretin. Of note, brain levels, more specifically cerebral spinal fluid (CSF) levels of hypocretin are measured with a lumbar puncture (spinal tap). This test may complete the diagnosis but it is also very invasive compared to blood sampling, for example.

Researchers are investigating brain cells (neurons) responsible for hypocretin secretion, since it promotes wakefulness, in the hope of finding more effective treatments. New research avenues also scrutinize the body’s immune system because narcolepsy may also be an autoimmune disease, with our own cells mistakenly turning against each other and selectively attacking the hypocretin brain cells. Stay tuned!

What are the consequences of narcolepsy?

Since people may unwillingly fall asleep during the day even if they are in the middle of an activity such as driving, eating, working or attending school, or have a cataplexy episode following a good joke, narcolepsy significantly impairs one’s quality of life.

Since awareness about this disorder and its consequences is very low, people may suffer from social stigma or mistakenly judge themselves. Consequences can be dramatic if left undiagnosed or untreated as narcolepsy interferes with all aspects of life, such as romantic relationships, friendship and work. People with untreated symptoms are more at risk of loss of self-esteem, depression or anxiety, school or work difficulties, or injuries such as unexpected falls or a car accident due to cataplexy or sleepiness attacks. Adapted safety measures must be taken.

Sleep experts’ help along with life and sleep hygiene adjustments and targeted medications, mean disease consequences can be minimized to keep narcolepsy on the bench and enable people to lead fulfilling lives.